30 min speech from Biya: this is what happened during the recording that you don’t know

National Dialogue: Ambazonians to get majority 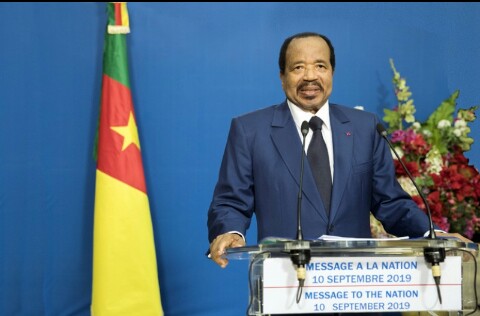 Very weakened, but firmly clinging to his desk at the cost of a superhuman effort, Mr. BIYA managed in exactly 30 minutes, three days ago, to deliver a pre-recorded message to the Cameroonian people but above all, to the international community that pushed him strongly.

It was a difficult test for a man in his state of physical and mental health and his age that, on the evening of May 20, delivered to the eyes of Cameroon as a whole, the image of a president, a old man lost, haggard, lost, speaking alone or rather talking to himself, guided and helped by his wife to understand what was happening around him and even to simply raise his arms in salvation, towards his guests who cheered him.

Yes, in 30 minutes chrono, a new Alzheimer patient stuffed with sedatives, can very well deceive the vigilance of the incredulous and make a speech about coherent.

But, firmly attached to his desk like a lifebuoy, we saw an old man, struggling to read his speech written in large format, scrolling on the teleprompter set to its maximum resolution in front of him.

Beyond the message of that day, here is the big challenge that Mr Biya faced this famous evening…

Recall that two days ago, this famous 30-minute speech was secretly canceled at the last minute, simply because the old man’s mental and physical state could not have been stabilized by his doctors.

So it is important to know this:

At each of his outings in public or when he must receive guests, the BIYA man is intensely supported by his doctors, under the supervision of his wife, to be mentally and physically stabilized , in order to give the change to its hosts or to the televiewers.

This is why Chantal Biya, his wife, never leaves his eyes and gives him a more than morbid assistance in public. In fact it is his daily lot in private.

If François Mitterrand his mentor for 14 years deceived the French people on his disastrous state of health, why not his best pupil Biya.

That’s why, I think 40-year-old President Emmanuel Macron is not doing a disservice to Cameroon, supporting the continued power of an old sick president, now 87 years old, unable to exercise power.

That is why the question of his resignation or dismissal of power, must be the major subject of this famous inclusive national dialogue that will soon open in Cameroon or elsewhere, and I will make sure that it is so.

The truth must be said and always so.