A groom chased from wedding after first wife turns up

The man, named as Asif Rafiq Siddiqi, was beaten by his new bride's family

A groom has been chased from his own wedding by an angry crowd – after his first wife arrived to let his new bride know he was already married to not one, but two other women.

Asif Rafiq Siddiqi, described as a bearded, hefty man in his mid-30s, was pushed and slapped by the crowd, his shirt torn and his pants ripped in the violence that followed the revelation.

The groom, who ended up cowering under a bus, was saved by unknown people.

Polygamy is legal in Pakistan.

However, while a man can have as many as four wives, he must get the consent of his previous wives before he marries again.

It appears that Mr Siddiqi failed to fulfil this critical step, and the first his new wife and her family knew of his previous marriages was when an enraged woman marched into the banqueting hall in the coastal city of Karachi, where celebrations were taking place.

“What’s the matter sister?” one of the bride’s relatives is heard asking on a video of the event.

The woman, Madiha Siddiqi, wasted no time in getting to the point.

“He is my husband, and he is the father of this child. He told me he was going to Hyderabad for three days,” she alleged. She was with a little boy she said was their son. 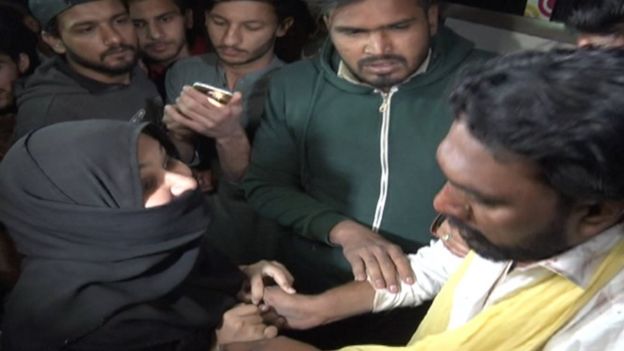 The family then tried to usher her into a side room, which gave her the opportunity to point out more of the people she claims are her relatives.

“That is my mother-in-law and that is my jethani [sister-in-law], who said her mother had been sick for three days and was on IV drips,” Mrs Siddqi continued, before confronting the newlywed bride directly.

“Didn’t you know that he was my husband? He didn’t even think about this innocent child.”

However, it did not stop there: Ms Siddiqi said she had married the groom in 2016, after meeting him at Karachi’s Federal Urdu University, where Mr Siddiqi is understood to work.

Then she revealed he had secretly married his second wife, named as Zehra Ashraf, a teacher at Jinnah Women’s University in Karachi, in 2018. The first Mrs Siddiqi knew of that marriage was a text message from her husband’s new wife.

Mrs Siddiqi said Mr Siddiqi initially denied that wife’s existence, but later admitted he had wed for a second time.

It was Ms Ashraf who also informed Mrs Siddiqi of the latest wedding, sending her in a rage to the celebrations.

It is not clear what exactly happened next. However, police called to the scene told BBC that relatives of the bride pounced on Asif, tore up his clothes and beat him black and blue.

The Social Democratic Front party SDF has lost the possibility to form a parliamentary group at the National Assembly following...

A fake pastor accused of raping thirty of his young Christian faithfuls is presently under custody at the National Gendarmerie...

A Ugandan imam, who was arrested after marrying a man in a wedding dress, has been released on bail, according...

Yaoundé — A group of young Cameroonian 'patriots' staged a demonstration in front of the French embassy in Yaoundé on...

Cameroon Massacres: “With a single helicopter, France massacred 120,000 Bamileke and Bassa in Cameroon”

The current Cameroonian socio-political context leads certain political and media players to delve into the history of the country. If...

Tension Inside Etoudi: Paul Biya refuses to take Macron on the phone

It was Journalist Denis Nkwebo who informed the public via a tweet he made on February 27, 2020. "Paul Biya...

Nigeria has recorded the first case of coronavirus, health officials confirmed Thursday. The Federal Ministry of Health in a Twitter...