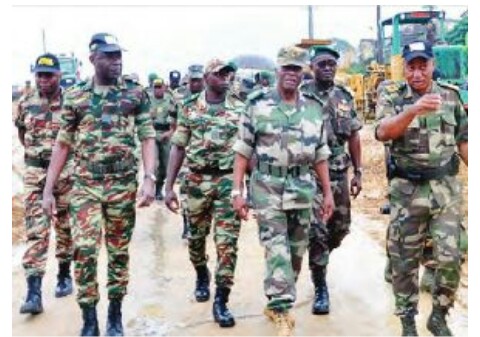 “As a professional army, respectful of the institutions and anxious to preserve territorial integrity and national values, the defense forces will therefore have a lot to contribute to this dialogue,” says Frégate Captain Cyrille Serge Atonfack, Chief of Division. communication to the Ministry of Defense.

Since September 11, 2019, the prime minister, head of government, receives in his services at the star building in Yaounde, various delegations on behalf of the preparations for the “Grand National Dialogue” announced by the President of the Republic to settle the socio-political and security crisis in Cameroon, primarily in the North-West and South-West Regions, which have been facing a secessionist war for about three years.

Prime Minister Joseph Dion Ngute opened the ball rolling consultations by the Social Democratic Front (SDF), the opposition political party leader. On this occasion, the delegation of the SDF, led by the Honorable Joshua Osih, the first strong president of the party of the balance, presented to his host, his proposals for the organization of the next “Grand National Dialogue”.

Among others, the SDF does not want to see the defense and security forces around the table because the high mass announced for the end of this month “is essentially political,” says the party of the chairman Ni John Fru Ndi.

On the side of men in uniform, we do not hear it that way. “The wide range of stakeholders at this important and even crucial time for our country will be the representatives of the defense and security forces whose attitude and actions throughout crises can not and will not be taken faulty.

From the initial moments, until the culmination of the crisis, military, gendarmes and policemen, are effectively present on the ground alongside our laborious populations, protecting people and property, raking nooks and crannies, in search of impostors almost always radicalized, drugged and sometimes heavily armed. Very often targeted, some cowardly murdered, the staff of our defense and security forces, also deserve to take part in the great national medication to heal their moral and psychological wounds.

The chief of the armed forces has decided this because, better whoever, remains convinced of the healing virtues of the word … Indeed, as a professional army, respectful of the institutions, and anxious to preserve the territorial integrity and the national values the defense forces will therefore have a lot to contribute to this dialogue. Proportionately protected, and strong of the status of crucible of the national unity, the Cameroonian army will be in known ground to discuss the subjects such as the unit, the national integration, the living together, the peace and the security, the bilingualism, cultural diversity, social cohesion, the reconstruction and development of conflict zones, the return of refugees and displaced persons, the education and judicial system, the demobilization and reintegration of ex-combatants “explained, Frigate Captain , Cyrille Serge Atonfack, Head of Defense Communication Division, in an editorial broadcast on Saturday, 14 September, on the national station’s “Honneur et Fidélité” weekly program.

In his special message of September 10, 2019, President Paul Bya had clearly stated his willingness to leave no one on the brink of the great national dialogue that begins at the end of this month. “It will therefore aim to bring together, without exception, the girls and sons of our dear and beautiful country, Cameroon, around values ​​that are dear to us: peace, security, national harmony and progress … Presided over by Prime Minister, Head of Government, this dialogue will bring together a diverse range of personalities: parliamentarians, politicians, opinion leaders, intellectuals, economic operators, traditional authorities, religious authorities, members of the diaspora, etc.Representatives of the Defense and Security Forces, armed groups and victims will also be invited “.