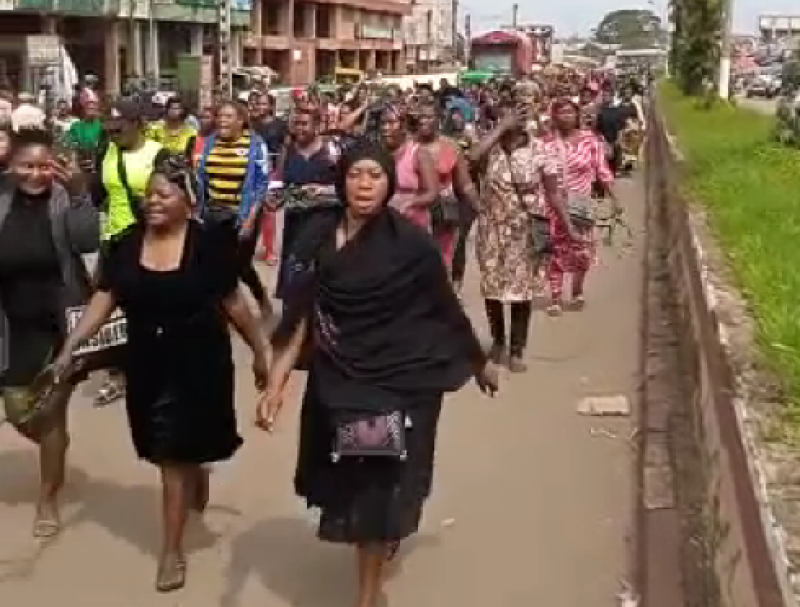 Women in Bamenda mourn victims of Kumba school attack Screenshot from amateur video
Large crowds of women from the ends of Bamenda flooded the streets this Tuesday to demonstrate against Saturday’s killing of at least seven students at Mother Francisca International Bilingual Academy Fiango.

From the ends of the city of Bamenda, the women marched up to the office of the Regional Governor to register their condemnation of the Kumba school shooting and also demand an end to the ongoing crisis in the country’s North West and South West Regions.

“We cry every day! Our tears have run dry!” The women sang as they marched, waving peace plants and placards. The women say they are tired of crying since the common law lawyers and Anglophone teachers’ protest morphed into an armed conflict.

Receiving the women at the esplanade of his office, the Divisional Officer for Bamenda II Subdivision, Nicholas Nkongho Mancha shared in the pain of the women. He urged them to accompany the state in restoring peace and security by denouncing outlaws who seek to impose terror on the population.

At Up-Station, the mourning women were received by Governor Adolphe Lele Lafrique who agreed with them that the Kumba incident is one too many. He assured them of measures taken by the state to ensure that such an incident never repeats itself again.

The Governor called on the women to denounce armed men hiding in their communities and to encourage such armed fighters to surrender and be pardoned.

“Dear women of the PCC, we bring you greetings though with such deep pain inflicted on us by barbaric souls. We write to condemn completely and totally the gruesome killing of our children in Kumba,” said Rev. Salle in a statement. “Following the cry from the Moderator and all the womenfolk, we decry and mourn for our children who have been sent to their early graves. Let us rise up from all angles to be the sound that will be heard in this land Cameroon.”

Drawing inspiration from Jeremiah 31:15, the pastor said like Rachel, the women have seen what has been done to their children and have refused to be comforted.

“The Time To Act Is Now! On Tuesday, October 27, 2020, at 9:00 am, all women of Mezam Division will converge at Finance Junction while those in Buea will converge at UB Junction to mourn for our children,” the convening note for today’s march said. “We will all appear in our mourning attires, peace plants (Nkeng), and a candle each for the sake of those children. Generally, all the women of our church are expected to pray for the repose of their souls and strength for their families during our group meeting days.”

Mourning for those who died in the Kumba school attack will end on Sunday, November 1, 2020, with solemn worship services in all congregations of the Presbyterian Church in Cameroon, Rev. Salle said.

“We add our voices to that of the Moderator of the PCC to say may those behind these gruesome killings of God’s children be imprisoned by the judge of the human conscience even before they are found out. God remains on the throne and will never forsake His own,” said the National Secretary, Women’s Work Department, PCC.

Around noon on Saturday, gunmen attacked Mother Francisca International Bilingual Academy Fiango, Kumba. State authorities say they opened fire on no fewer than 19 students, killed at least six (five girls and a boy), and badly wounded about 13 others – ten girls and three boys.

Yesterday evening, President Paul Biya addressed his solidarity and sincere condolences to the bereaved families as well as the educational community. He joined his wishes and the deepest empathy of his wife for the prompt recovery of the injured.

Fri Awasum Mispa of the Movement for the Rebirth of Cameroon (MRC) was arrested Saturday in the capital Yaounde. Msipa...

The Governor of the restive North West region of Cameroon has warned those involved in the manufacturing and sale of...

We use cookies to ensure that we give you the best experience on our website. If you continue to use this site we will assume that you are happy with it.Ok