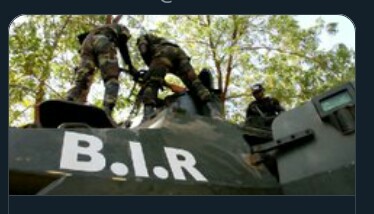 In Cameroon, the “Rapid Intervention Battalion”, an elite unit of 5,000 soldiers, is suspected of the worst abuses in “secret torture chambers”. These special forces are equipped and trained by France.

In Cameroon, too, French military equipment is used against civilian populations. In the north of the country, the national army of the irremovable president Paul Biya, an old friend of Paris for decades, has since 2009 a merciless struggle against the jihadist group Boko Haram.

But the BIR – “Rapid Intervention Battalion”, an elite unit of 5,000 soldiers – is regularly accused of violating human rights and suppressing the local population under the guise of counter-terrorism. In recent years, several NGO reports have supported the allegations of torture and summary executions against these commandos (read here).

However, according to a survey by “FrenchArms”, a project initiated by Lighthouse Reports in cooperation with Disclose and the support of Arte, Bellingcat, Radio France and Mediapart (see Black Box), French-made “Bastion” military vehicles are used by BIR in these border regions with Nigeria and Chad.

These light armored vehicles from the assembly lines of Arquus (formerly Renault Trucks Defense) are used by the Battalion occupying one of the largest illegal torture centers in the region, as shown in the images below.

In the south of the country, where the Cameroonian army represses in blood the English-speaking minority, the BIR also uses, according to our information, the same armored vehicles manufactured in France. Taking advantage of the relative decline of Boko Haram in the North, the Cameroonian government has indeed chosen to redeploy its elite troops to the English-speaking regions.

According to diplomatic sources, Paris and Washington, who train and equip these units (along with the Israelis), expressed their dissatisfaction at seeing these soldiers move from the fight against terrorism to what appears to be a civil war. But Paul Biya has turned a deaf ear and the Quai d’Orsay has not, it seems, too insisted. In June, a reporter from Mediapart saw firsthand that BIR continued to operate in the English-speaking regions of Cameroon.

According to the SIPRI (Stockholm International Peace Research Institute, which publishes annual databases on arms sales), France has sold 23 “Bastion” to the Cameroonian regime in recent years. The purchase on behalf of the Cameroonian authorities has been funded by the US Department of Defense, as part of military and security cooperation programs, since suspended in response to allegations of human rights violations.

These deliveries of equipment, confirmed by the website of the ATT (Treaty on the arms trade, signed by France), took place in 2015 and 2016. After that the first serious alerts on the abuses of the national army , and in particular BIR, have been relayed internationally. What puts France in difficulty, the “common position” of the European Union, set in 2008, providing that “Member States are determined to prevent the export of technology and military equipment that could be used for the purpose of internal repression “.

Solicited, the company Arquus did not answer our specific questions on the subject. The Council for French Defense Industries (CIDEF), which represents the professionals of the sector, reminds that the latter do not operate without “prior authorization issued by an interministerial commission placed with the Prime Minister” (see the complete answer under the tab Extend).

The Cameroonian authorities have not returned our requests for maintenance, but the French government believes it has control of exports of war materials both “strict, transparent and responsible” (see also under the tab Extend ).

Silence radio, however, at the Quai d’Orsay where embarrassment reigns in some diplomats. Especially since, in the wake of a first report already severe on the violations of human rights by the Cameroonian army in 2015, Amnesty International revealed two years later, with supporting images, the existence of “Secret torture chambers” in the hands of BIR in the north of the country.

The NGO relied on “the cases of more than a hundred people, including children, arbitrarily detained, tortured or even killed in secret places, under the nose of high officers of the Cameroonian army “. 32 out of 101 witnesses interviewed by Amnesty say they “saw other detainees die as a result of torture”.

The organization also listed “24 different torture methods” (“the most common being beatings, painful tenderness positions, suspensions and simulacra of drowning”) and about 20 torture camps used between 2014 and 2017. Among them: the BIR headquarters in Salak, near Maroua. The one where we established the presence of French armored vehicles.

In the two English-speaking regions of the Southwest, the BIR conducts “counter-insurgency” operations aimed at cutting off the civilian populations of the insurgents. These methods were taught to them by French, American and Israeli trainers, according to the principles elaborated by France at the time of the wars of Indochina and Algeria and perfected by the Americans in Iraq.

Several testimonies collected by Mediapart in Cameroon are also a parallel between the bloody war that took place in the country before and after independence in 1960, and the operations conducted today in the English-speaking area. We would find the same level of violence against civilian populations.

What began in 2016 with demonstrations aimed at achieving respect for bilingualism and the equality of all citizens has since turned into a veritable civil war, particularly because of the abuses of the Cameroonian army. Many testimonies collected by NGOs and the international press mention houses burned, rapes, torture and assassinations “for example” in the villages of the English-speaking area.

The government has done everything possible so far to quell the conflict that has caused, at the very least, 2,000 deaths and more than 500,000 displaced. “Even though the insurgents are conducting guerrilla operations and are now better equipped with weapons from neighboring Nigeria, most of the violence is attributable to government soldiers, including the infamous BIR, which has a bad reputation in the region,” he said. says the Africa leader of an NGO that conducted field surveys in Cameroon.

A video showing BIR’s use of the Bastion was geolocated in the suburbs of Buea, the unofficial capital of English-speaking Cameroon, and one of the strongest points of tension between military and insurgents.

President Paul Biya called at the beginning of September 2019 for a “national dialogue” of all parties to try to resolve the conflict, but without lifting armed operations or releasing heavily convicted prisoners for speaking out or taking part to insurrection. Above all, even though this civil war, which does not say its name, is coming to an end, most English-speaking Cameroonians feel that they will have a hard time forgetting what happened, given the level of abuse by government troops. for almost three years.