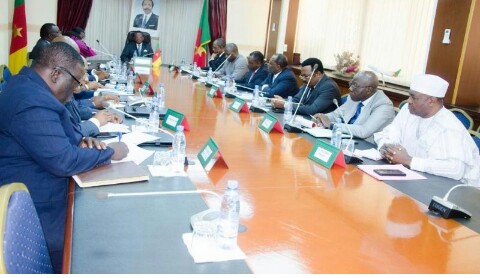 Chosen by the President of the Republic to preside over the Grand National Dialogue to resolve the socio-political and security crisis in Cameroon, Prime Minister Joseph Dion Ngute held Wednesday, September 11, 2019 in his services in Yaoundé, a first preparatory meeting.

“I meet with government officials from the Southwest and North West regions to reflect on field work for pre-dialogue consultations, in preparation for the national conference mandated by the President of the Republic” wrote the head of the government on the twitter account of the Primature.

After this limited meeting, Joseph Dion Ngute, according to our sources, has planned other meetings of consultation with personalities from elsewhere. The race against the clock has therefore begun in order to complete the maximum consultation before the beginning of the end of September 2019, the Grand National Dialogue.

“Chaired by the Prime Minister, Head of Government, this dialogue will bring together a diverse range of personalities: parliamentarians, politicians, opinion leaders, intellectuals, economic operators, traditional authorities, religious authorities, members of the diaspora, etc. Representatives of the Defense and Security Forces, armed groups and victims will also be invited … Prior to the effective holding of the dialogue, the Prime Minister, Head of Government, will consult widely, in order to collect the most diverse opinions. , which will serve as sources of inspiration for the conduct of the debates. Delegations will also be sent in the coming days to the meeting of the diaspora, to enable it to contribute to these reflections on the resolution of the crisis “said the Head of State, Paul Biya, September 10 2019, in his special message to the Nation.