by Daily News
in English, POLITIQUE
168
0

The reshuffles observed within the Cameroonian army a few days ago would only aim to strengthen the protection of Franck Biya who emerges as the next strong man of Cameroon. Indeed in a decree attributed to the President of the Republic who has not been showing signs of life for a few days, Paul Biya replaced the elements of his presidential guard.

“Franck Biya currently protected by the army. They want to take power by force !! These are the reasons for the multiple appointments yesterday and the changes to the head of the gendamerie legion. All the colonels have been replaced, including the presidential guard! “Reveals Martin Tajo. 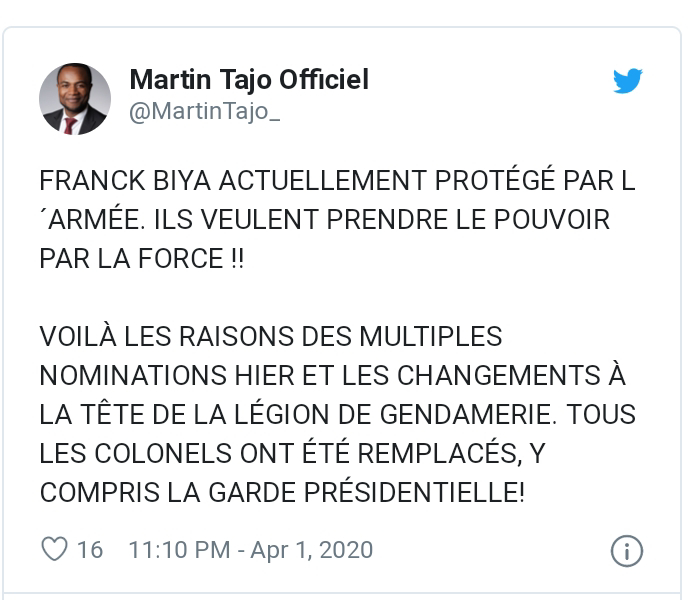 The civil society actor calls on the army to remain republican.

“In this period when the political climate is very tense in Cameroon, the Cameroonian army must side with the people who are the only sovereign and not let the conspiracy specialists drop an individual in power. Our constitution must be respected in its Art. 6 (4) ”tweeted Martin Tajo.

Power from father to son

The rumor becomes persistent. Cameroon would have been without President for several days and speculation is rife about the identity of the man who would replace Paul Biya. According to several credible sources, Franck Biya, the eldest son of the current head of state of Cameroon is preparing to replace his father.

No one really knows if Paul Biya is alive or dead. Even if he takes decrees and other important decisions, several sources at the presidency confirm his medical evacuation in Switzerland. The rumor of the disappearance of Paul Biya brings up to date the debate on the succession of the man who has ruled Cameroon since 1982.

Franck Biya is a discreet man. The President’s son fled the media. He never expressed his passion for politics. In fact, contrary to the practice in Central Africa, Franck Biya did not enroll in the school of politics like the other sons of the president, as in Gabon, Equatorial Guinea or the Congo. He does not hold any office either in the office of the CPDM, nor in the government of his father even less in the parliament.

For observers on the Cameroonian political scene, the son of the President of the Republic is not interested in power.

“If Franck Biya was interested in supreme power, he would not be living far from power. He would be in the school of power, like the other sons of heads of state, who occupy key positions, “confided the journalist and writer Magnus Biaga Chienku, to the newspaper La Tribune Afrique.

Franck Biya, if he decides to seek the supreme magistracy in Cameroon would therefore not be accountable for the long management of the power of his father. Perhaps that is the reason why he always avoided being in the spotlight.

A man of networks

If Franck Biya does not have proven political experience, he can however count on his professional networks forged over the years. Indeed after his university studies, Franck Oliver Biya went into business. He has invested in different sectors and heads Afrione Cameroon and SFA Ingénierie.

Franck has the full confidence of his father and is used to advising him. He would also be involved in the appointment of certain ministers and general managers in Cameroon.

“It is important to note that in business, he acts here with great discretion. In this area, he has a significant strike force since he advises his father, has ministers, general managers appointed … And in these positions, he derives a lot of benefits, in legendary discretion”, specifies Magnus Biaga.

Even if he did not have to exercise power with his father, he will inherit his political enemies and will have to face within the CPDM the ambitious executives who have dreamed for a long time to succeed the old Paul Biya.