National Dialogue: Here are the proposals of the SDF to the Prime Minister, Joseph Dion Ngute 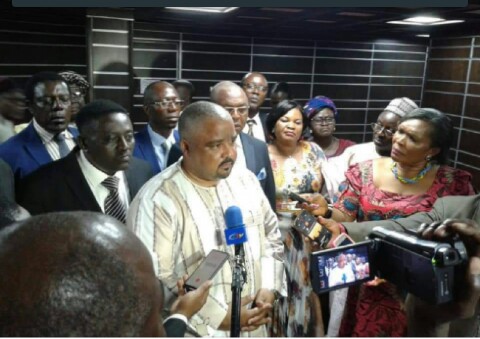 The Social Democratic Front (SDF) of Ni John Fru Ndi is willing to participate in the great national dialogue announced by Paul Biya by the end of September 2019.

The delegation of the first opposition political party, led by its first vice-president, the Honorable Joshua Osih , was received on September 12 by Prime Minister Joseph Dion Ngute , who will preside over this national meeting.

The SDF proxies took the opportunity to lay down the conditions for their party’s participation in this dialogue, which many present as the only way out of the crisis in the North West and South West regions.

Among these conditions, the appointment of a neutral personality to lead the meeting and a debate on the form of the state.

Joshua Osih skipped these conditions in a message posted on September 13, 2019 on the internet:

Here is the entirety of his publication:

The SDF delegation, led by the First National Vice-President Hon. Joshua N. Osih met with the Prime Minister, head of government, as a prelude to the dialogue announced by the President of the Republic. This meeting allowed us to expose to the Prime Minister for transmission to the Head of State, preliminary conditions for our participation in this long-awaited inclusive national dialogue.

We have placed particular emphasis on the fact that this announced dialogue must deeply satisfy the aspirations of the English-speaking population and the minimum required for this announced national dialogue has clearly been broken down as follows:

Inclusive national dialogue should be chaired by a neutral personality.

This dialogue must elucidate the deep roots of the Anglophone crisis.

The form of the State must be included in the agenda from the beginning of the dialogue for plenary debate with a view to the adoption of a new Constitution for Cameroon and this point must be reflected in the agenda of the this national dialogue.

Since this national dialogue is essentially the result of the Anglophone crisis, Anglophones must occupy a central place in the discussions and a pre-conference between Anglophones must be organized for this purpose to avoid the scenarios of the 1972 referendum and the 1991 tripartite meeting.

The declaration of a cease-fire

The guarantee of a general amnesty for all those involved at any level in the Anglophone crisis so that they participate without fear in this inclusive national dialogue.

We have welcomed and appreciated the fact that the Prime Minister has told us that the United Nations and the African Union and the Commonwealth have expressed their willingness to participate in this inclusive national debate and we hope that countries such as the USA, Great Britain and Germany are also participating, as the third bloc of friendly countries, in this inclusive national debate.

Finally, we mentioned that the driver of this inclusive national debate should be clear beforehand on specific points, in particular:

The timing and the different sequences that must be consensual.

A clear definition of the content of this national dialogue, including the structures and mechanisms put in place.

The assurance that the major protagonists will participate end-to-end in the various processes, namely the preparatory phase, the decision-making process and the implementation on the ground of the conclusions reached by mutual agreement at the end of this dialogue. For an effective and efficient and lasting return of peace in these two regions.

The SDF is aware that inclusive national dialogue is in essence a process and we are waiting for the signal from the initiator to indicate to the different protagonists the way forward.