by Daily News
in Uncategorized
2
0
2
SHARES
Share on FacebookShare on Twitter
The decision was made on August 21 by Adolphe Minkoa She, the rector of this university. 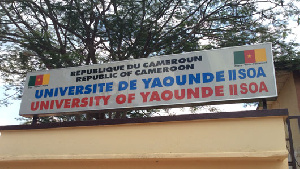 The decision of the Rector to unregister these students from the central file, “intervenes after finding of termination of office of the validity of their enrollment in the cycle of Doctorate / PHD”. These students are from the two faculties of the University of Yaounde II, the Faculty of Political and Legal Sciences (FSJP) and the Faculty of Economics and Management Sciences (FSEG). But also, students from the universities of this university, including: “The Higher School of Sciences and Techniques of Information and Communication (ESSTIC), and the Institute of Training and Demographic Research (IFORD) whose years of registration are compromised between 2002-2003 and 2012 -2013, except for the academic years 2003-2004 and 2004-2005 “.

Our colleague says that this decision of exclusion induces the end of preparation for these students of their theses.Mutations states that, “those students who filed their thesis on the date of signing the decision must address a request to the administration.

Lesotho's Prime Minister Thomas Thabane, 80, is to be charged with the murder of his estranged wife Lipolelo Thabane, police...