by Daily News
in AFRIQUE>Burkina - Faso
2
0 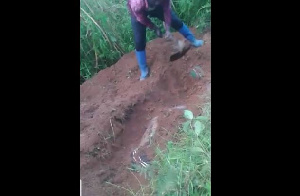 A new revelation in the case of the young lady buried alive in Batibo. It is the militia of a minister of Paul Biya who would be behind this massacre, says the anglophone journalist Michel Biem Tong, in exile.

According to the journalist, the MKPD, the militia in question, which is none other than that of Minister Atanga Nji, is the author of this execution. Moreover, the journalist reveals that their action is perpetrated only in order to deceive the international community at the dawn of the speech of Paul Biya to the UN on September 26th.

The MKPD, according to Michel Biem Tong, is the author of the performance and is also the first to broadcast the video on the web. Nevertheless, the secessionist leaders condemned the act and called for condemnation of the perpetrators.

This lady on the picture is the one who was buried in Guzang by Atanga Nji Boys.She appears in front of young people who recently on two videos and carrying the flag of Cameroon presented themselves as ex-combatants. These videos were sent to MKPD for broadcast.

Curiously, it is the same MKPD which broadcasts the video of this same lady buried undoubtedly by the same group of former fighters. It is neither more nor less than montage to deceive the international community.

Generally, when an armed group lays down an act, it claims it. However, no independent Anglophone movement has claimed the burial of a living woman in Guzang.

-Everyone knows that in addition to the real AMBA BOYS, there are also groups of bandits sponsored by the regime who kidnap against ransoms, who kill and then decapitate the real AMBA BOYS who, they are supported by the local population are accused of having done so.

How to explain that it is a certain Ma Kontri Pipo Dem, pro-Biya English activist, who is the first to broadcast such a video?It’s simple. The groups of bandits close to the power of Yaoundé commit atrocities, then they film and send to Ma Kontri Pipo Dem for broadcast.

-This video comes at a time when English-speaking separatist forces and much of the international community are skeptical about the organization of the national dialogue. So the Yaoundé regime wants to pose such acts to attract the sympathy of the international opinion at the approach of the General Assembly of the United Nations.

That those who want to be abused by the Biya regime continue to be abused. I will not eat this bread. The real AMBA BOYS would never do such an act and even if they did, they would never film it for publication. This is the work of gangs of thugs sponsored by the Biya regime to distract the international opinion of the massacre of 10 farmers in Mutengene just hours after the speech of Paul Biya of September 10th.